Well the last weekend was fraught with danger for the armies involved in the GoG weekend. For those of you new to the Blog this is where a few mates get together once...or twice a year (if we can get away with it) on a grand scale and hold our very own tournament.
We all look to bring new armies, which we have worked on over the last year, this year seeing some fine additions to our already large collections!
Eddie Artillery brought a new Tyranid army, SilverBack brought a new Tyranid army, Silverfox brought his World Eaters chapter of chaos marines, Varistat (Tea Urn to his mates) brought along his revised and renovated Dark Eldar and I brought a combined force of Deathwing and Ravenwing from the Dark Angels chapter.
Over the course of two days we slugged it out in 5 games, with the winner being Urn, just pipping the Silverback and Eddie to the post in the final game!

Great weekend hosted at Urn's place, a night out at the local boozer on the Friday, an all day session of gaming on the Saturday, followed up with Rugby, cider and cash for guns!! Oh and lots of Pizza!!
So here are some of the clips from the weekend. 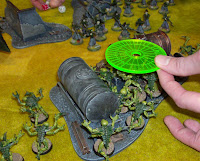 Siverbacks nasty Swarmlord, all the conversions were done by the great Simian, fantastic job it has to be said, all from plasticard and greenstuff! Although I think he's hiding here, from Urn's nasty Dark Eldar lances! 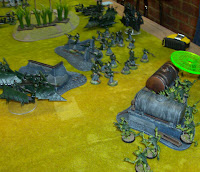 The Dark Eldar coming over in waves!!
Meanwhile the battle rages between

the World Eater chapter and the Dark Angels. I think this was all that was left of my army at this point...they were just debating who should take on the frothing monstrosity just over the hill!! Uh oh...there's two of them! 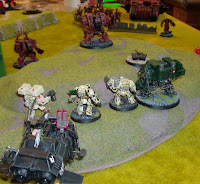 My terminators just couldn't stand up to the 5 attacks from the Chaos Dreadnought! My dreadnought having fainted before them!
The poor Venerable Dreadnought on the other side of the table was literally run over by the rampaging Defiler, 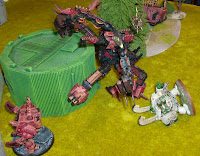 someone suggested that it would be a good idea to shoot the Battle cannon of it!! This just made it mad!

On the right here, Eddie has just heard that Silverback is getting close to drawingthe last game with Urn!


This is a more panoramic picture of the game between myself and the Silverfox!

The start up of our game looked slightly more promising, well right up until the V

indicator, blew the legs off my Venerable Dread...this quickly becoming his head once I had asked him to re-roll the hit on the chart, due to him being "Venerable"....oh well!

Here is the Silverbacks Tyrannofex!

Another really nasty gribblie from the new Tyranid codex! 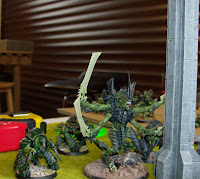 Here is another better shot of the Swarmlord, he managed to survive all the game against Urn's Dark Eldar! A real feat against that many Dark Lances!! 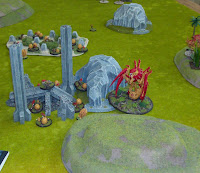 Earlier in the day the Nids of Eddies swarm took on the Dark Eldar, a win for Urn I believe! Here's the Carnifex about to chew through a squad of Witches.....whaadddayaa mean they've taken drugs!! Ouch!

me time on another planet my Dark Eldar took on the Swarm of the Simian......here I realised that taking on the Swarmlord with the Emporers finest just wasn't the thing to do!! Just shoot it next time! I got duffed even after killing all the guards with it! WS9 and the "Paroxysm" mean't I needed 5's to hit and 6@ to wound!! :-(

I thought I had a chance with all my Tough bikers and Terminators...

.not so though...the Silverback showed me the error of my ways...little recce mean't a number of surprises for my brave chaps!!

Here is the moment Eddie adorned the GoG sombrero, a time honored relic, worn and jealousy guarded by the current leader of the tournament!

And here on the left is the moment we told him that Urn may be getting it back!
There was an interesting opening battle between the two Nid armies, these Mycetic spores (All hand made by

Eddie) were really tricky, having lash whips to reduce the number of attacks you could put in and then hitting back as a monstrous creature!

These really, really hurt, dropping into the main part of the enemy, they then deliver their shooty pay load and attack anything close by! 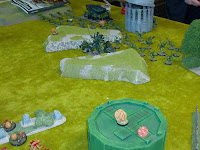 The carnifex above is hiding behind the fuel depot! The twin linked devourers were also a nasty addition to both Nid armies!
Here is e

ddie's Tervigon conversion, the torso has been created from "Super Sculpy" the rest being from the Nid "Bits box". A really nice looking model! 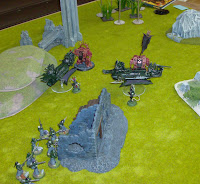 The other opener was the nasty Dark Eldar taking on the even nastier Kharn and his World Eaters!!

The Vindicator rumbles forward to deliver it's collossal payload! Supported by the Lord with his retinue in the Chaos Landraider.

The two dark armies square up for the off!!

There were so many Dark Lances any army spent a lot of time hiding and looking for the quick counter strike...much like Bristol City on the day!

So in the end a good time was had by all....the nominal prizes were dished out, with the ubiquitous Ogryn making another appearance! Along with a really nice Vostroyan Command and Khorne Berzerker box set, all for the loser to pick first! I got two of these prizes!! (Go Figure)!
Last but not least, I had taken a fine conversion for this game using a figure out together by a talented mate of mine Mr Scott! This figure was of the Chapter Master of the Deathwing....Belial...the toughest of all the elite first company!! The slayer of tyrants....the annihalator of the swarms!! He paints his armour Bone as he never expects to come ba

ck from battle...to the Death! Only he's PINK!! Curse this brown/green colour blindness!! I thought he looked cool until the sniggering sarted!! Probably explained why he died a lot!

Oh well, I'll re-paint him and get him on e-bay with the rest of his mates!

Nice commentary and the pics of Nathan are priceless - I bet Virg will have them as her screensaver within a week.

And he's not pink - he's a very naughty boy.

Cracking weekend - Seeing peoples faces when the Doom of Malantai popped in was great!

Fantastic photo-journalism that man - great write-ups and some top pictures to show the day off!

Mrs Artillery has pointed out that there is no mention of the drunken BFG being shifted off the bonnet of her car with the timely use of her wiper-washs!