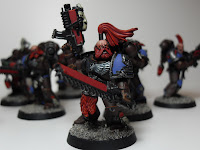 OK so I wasn't expecting to finish them quite this quickly after the last post but that's 2011 for you!

I've used a mix of black lining and highlighting and washes to see what happens really; so consider this bunch my experimentation marines. 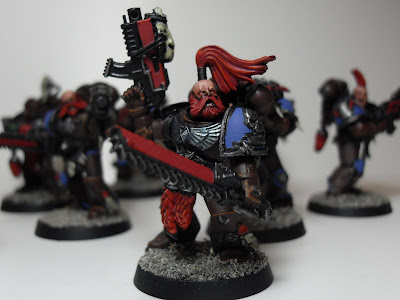 You're probably wondering about the colour scheme and why aren't they grey? To be honest if you need to ask me why something isn't painted in the suggested colour scheme then you've not been paying attention for the last, erm, 11 years since I started this 40K lark. I come from a historical wargaming background where everything needs to be painted exactly right or there will be tutting - I rebelled :-) 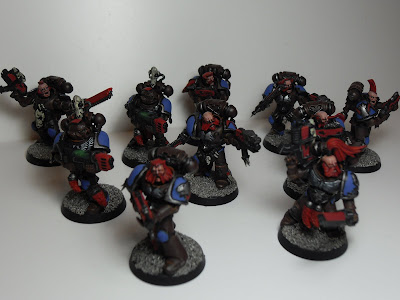 Anyway I used Scorched Brown as I've not used a brown basecoat before plus I wanted a dark colour so I could then get some contrasts in place. I've gone for Red and Blue and muted Boltgun as the contrasts.

Scorched Brown is highlighted with Bestial Brown. Mechrite Red with Blood Red. Mordian Blue is black-lined. Boltgun is washed with Badab Black except any chest plates - these have been washed with Asurman Blue. 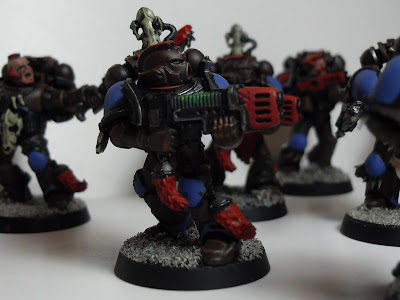 Someone once told me - and I can't remember who so apologies - that triangles of colour are what draws the eye. Now I'm not saying I've got triangles involved here but I've tried to use the colours in strategic locations on each model.

Blue on the shoulder and knee pads only. Red on the weapons and hair. Boltgun on the metal bits (hey I'm original sometimes). The red fur came about because I tried it with grey and I suddenly had too many colours. So I decided that all the feral wolves on the home planet of this pack have red fur; when the pack go through their initiation they then dye their hair red in respect to the wolves. Or somesuch.... 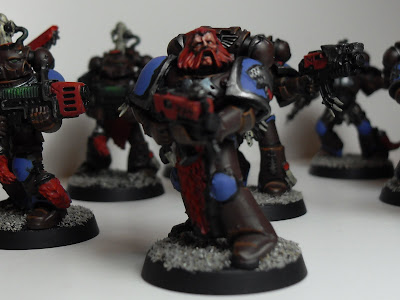 The basing is Army Painter Ash Grey flock; it's quite muted and I like it lots. Nice and easy!

I have no idea yet how I'll tell the squads apart; might be something painted on the backpacks. I'll worry about it when the second Grey Hunter squad appears which as it's not built yet will be a while.

Next up Planetstrike stuff . We had a game last night and it was a lot of fun. It looks like I need to paint the Bastion, Landing Pad and Fortress together with some additions to my Tzeentch force. All in the next couple of weeks. Um well I'd better be getting on with it then.

You're thinking of the stuff that overheats. I'm sure my Wolves are using that colder plasma...