I'm still chipping away at the scenery and, perhaps more importantly, I'm still really enjoying focusing on this stuff.

I've always liked making and painting scenery but I must confess that it has been somewhat cathartic to make progress (or even start) on some of the bits I've had hanging around. The TTCombat stuff is still relatively new but I've had some of this other stuff for some time.

The Scrapyard stuff is from Ainsty from a range of urban apocalyptic barricades type stuff but when I saw it, all those years ago, I thought they'd be great to have fenced off as a scrap merchants yard. I could do with a few more busted up cars but this will do for now. 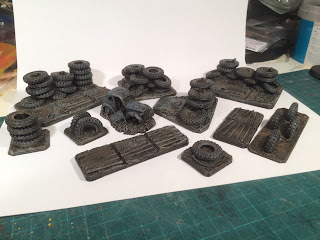 I've got wooden fencing to go around the scrapyard now so I need to get that finished as well as the scrap merchants caravan which is a Sarissa Americana style caravan I got at Colours. After that The Yard will be finished but I suspect I'll add some more scrap cars. As it happens I have a plan involving some tin foil..........

Done, except for a lick of varnish, is the TTCombat building site set which is a very cool set given its low price. Signs, barriers, generators and flood lights. Nice and characterful and they'll be good scatter terrain for Superhero games. As Urn pointed out "Nice signs too, eh great for the supers to smash each other with!" 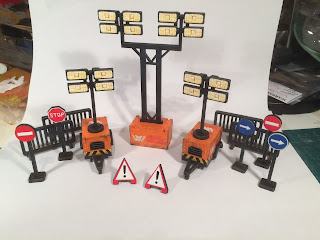 Almost done now is the rooftop furniture set also from TTCombat. I have become a serious fan of their stuff. Its solid, functional and cheap. All good words but more importantly than that, it looks great once put together and painted. I've got several of their buildings lined up to do as part of Scenery September and I'm really looking forward to getting cracking on them. 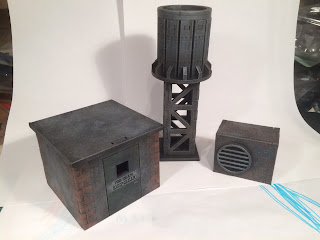 I do enjoy the finishing little touches on the MDF scenery. The MDF kits take washes well and so devlan mud and nuln oil weathering is quick an simple to do. I also find inks quite fun to use as they soak straight into the wooden without their usual shiny finish. It adds a strong colour without adding a different texture to the surface. I've tried to get a contrast between the grey and the bricks on the fire escape block but it looks a bit subtle in the picture so I might revisit that prior to giving them a varnish. I want to use that sort of effect on some of the buildings so it is nice to have a small piece to practice on.

I got through today the other piece I needed for my dock crane. I got the steam crane Sarissa kit at Colours and now the Oil Well from TTCombat has arrived to be re-purposed to be the base of the crane. It'll need lots of rivets as the kit is pretty plain but it was only £3.95 so no complaints from me. I do want lots of rivets on it as I plan to have a lot of rusty weathering on it. REALLY looking forward to putting this together! 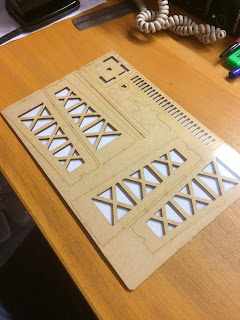 These are great! The tt stuff is awesome and I do like the bright orange and bright sign colours. The scrapyard is ace, but I'd recommend you add some colour to the car..... It's need weathering down, but it just blends in being the same colour as the other pieces. I do like the rooftop stuff and I clearly need to pull my finger out now!

yeah i am well behind this level of output

You are right about the car. It's slightly better up close as the photo has washed the colour out a bit but it is still grey. Hmmmm What colour to go for?? The trouble is that it is an old style car that were mostly......er...black.

Maroon? Dark solid colour that will show up some weathering quite well.

Hmmm
I'll think on that til tomorrow night when I gt a chance to paint again.

Old cars came in all colours (search duco 1930s car paint). The "any color as long as its black" quote was to do with the assembly line and mass production more then anything else. But I agree it would benefit from something brighter.