As Eddie has been performing sterling work keeping the blog going, I thought I'd better actually blog about what I've been doing.  I've actually had a sustained period of painting going on, somewhat unusual for me as I tend to slow down when not taking part in the analogue hobbies painting challenge (AHPC).

Back in the AHPC, I got interested in Epic 40k given the good work of GregB in the game.  Looking on eBay I was surprised at how cheap the figures were for an out of production game, so I bought a box of Chaos troops and two of fellow gamers were "encouraged" to play.  Fortunately they had about as much willpower as me and eBay was rather quickly stripped of everything of reasonable value that it had!

As I'm sure readers will empathise with, we tend to find that once the initial excitement of a new game passes, it's tough to get it played unless the figures are ready as the next shiny thing is only an internet click away..... so we resolved to get things painted quickly to make the games look good and here are my offerings from the Wordbearers, who are a chaos force fanatically devoted to worshipping chaos gods and their daemons. 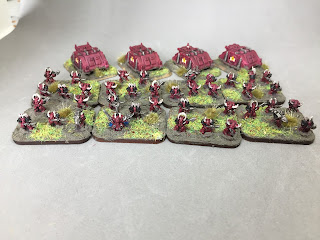 Nice and quick with a block colour and wash approach.  GW does love giving chaos figures horned helmets, but at this scale they work nicely to add another colour in.  I liked the base sizes GregB uses for his epic forces so I acquired some MDF bases to spread the figures out a little.  The vehicles have decals applied to give another point of interest as free handing tiny tanks like this is something I shan't be attempting! 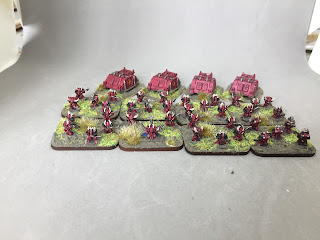 Next up, some support in the shape of a Havoc squad.  These are the heavy weapon chaps and I put these on different shaped bases for easy recognition - an idea I stole from other entrants to the AHPC who use base sizes to denote officers in other games. 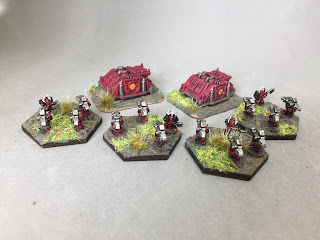 Now to the weirder stuff.... the old school chaos force comes with marines riding steeds of slaanesh, so I decided to use these as chaos bikers 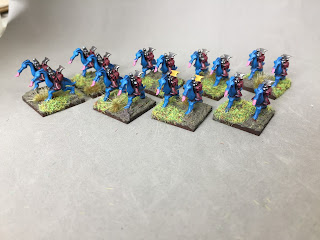 ﻿
Next up, some daemons to summon.  These are from Vanguard miniatures and are very nice Daemonette and Bloodletter stand ins as the original GW models for these figures are pretty hard to come by in numbers sufficient to use as units.
﻿ 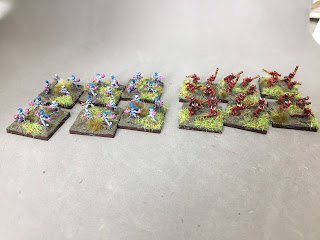 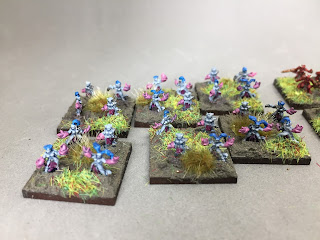 After a few games it quickly became apparent that I needed some terminators to help reach out across the board as Chaos has no artillery to speak of.  I picked up a pretty badly beaten up lot from eBay that had just enough terminators to make a unit of if I paired them with leaders and some khorne daemons as I suspect the terminators will be summoning daemons pretty sharpish to give them support when they drop into the backfield.  Thin bases as that's what they came with and consistent basing isn't required in epic as GW changed their basing convention through the different versions of the game and didn't want to annoy veteran players! 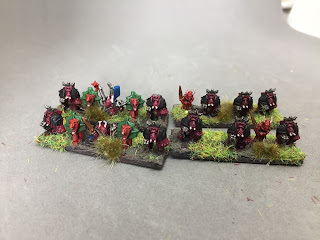 The beaten up lot I just mentioned had a few of the cult troops, namely berzerkers and noise marines, so I did the unthinkable and shoved them together to make a unit (with the odd daemonette added to bulk them out) and painted them all pink to be slaaneshi noise marines 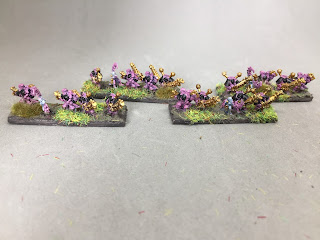 That lot also included (told you eBay was good value!) enough marines for another detachment of them.  These are a different generation of sculpts to the above marines and will give me plenty for the bigger games.  I do need to get some rhinos sorted for this lot and the noise marines above. 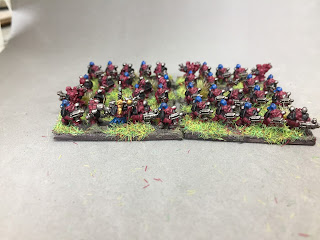 Next up, some more daemons from Vanguard miniatures.  These will represent daemonic beasts and are little hounds that I painted pink to be easy to pick out from the basing.  They don't hit as hard as the daemons above, but are faster so will be able to keep up with the bikers for example. 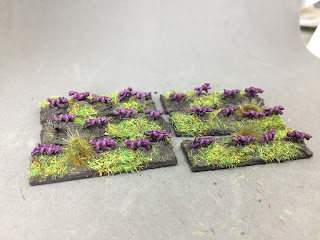 As part of my starting force I thought I'd best get some armoured support ready, and what says armoured support better than some land raiders?  a unit of four, mixing two marks of the vehicle because that's what I had. 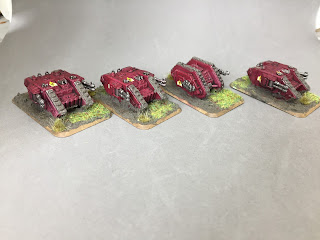 And lastly, the compulsory group shot.  The eagle eyed amongst you will notice I've added another squad of land raiders, but their decals need finishing, so they didn't get their own shot above.... 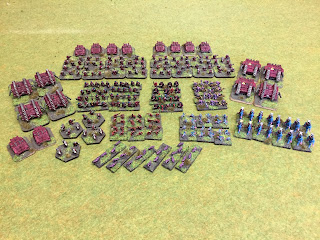 We've﻿ played some really good games of epic and they look grand as we all worked hard to get painted forces together.  It's really pleasing to have a "finished" force ready to pull out whenever we want to use it as 40k 8th edition seems to have grabbed our attention and will no doubt do so for a while....
Posted by JamieM

Great work Jamie! I have found Epic will always be there to grab your attention back, so I wouldn't worry too much about that :)