As that's the unofficial motto for all wargamers, I thought I'd dive in with a new army to see how it plays.... and the winner was Necrons!

These poor misunderstood chaps have had a bit of a journey.... I think most of the troops were from eBay auctions originally and were a mix of colours and basing.  One of my mates then added a bunch of vehicles when they came out and painted them in a spiffy metallic blue colour.... and then decided Necrons weren't for him and passed them onto me for a very good price to keep them in our gaming group.  I subsequently decided I had too many armies (as you do) and passed them onto a friend for his son to use.  His son has decided he's going to follow the chaos gods, so shiny metal evil chaps were no use to him and so I got a whole bunch of chaos models together and swapped them back.  So I decided to get on with it and make them a cohesive force for 8th edition!

My approach when painting armies is to get the bulk of the rank and file done together as I really dislike using unpainted models on the tabletop.  I'm fine for them to be used whilst painting happens, but I make sure that every time I use them, there is some progress. The gaming should then encourage me to paint more and the virtuous gaming/painting circle sustains itself!

I spent a couple of hours repairing the large warrior contingent and I found I had enough to paint up two max sized units of 20.  I do like to start with maximum sized units as they can always then be split out as required. 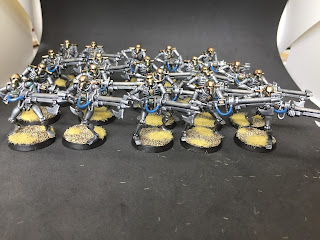 Classic metallic base as I knew I could recreate it across the army quickly.  To this I added a brass head, shoulder pads and chestplate.  I wanted a cold brass colour to keep them looking menacing and I'm pleased with his they came out.  The classic Necron warrior only has one pose, but I think that suits their relentless nature rather well as these guys are the 40k equivalent of skeleton hordes. 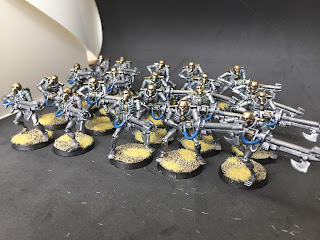 Next up.... another 20 looking almost identical 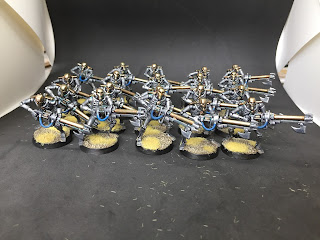 The main difference is the brass gun barrels so that I can tell them apart if there is a swirling melee on the battlefield.  I'm not a huge fan of the green acrylic the classic Necrons have on their guns, the effect just looks wrong on a 28mm miniature to my eye, so it was nice that doing my overspray for the repaint helped me fix this.  I think GW probably agree these days, as none of the more modern sculpts in the Necron range use acrylic, this paint job should tie the warriors in with their newer sculpted bretheren. 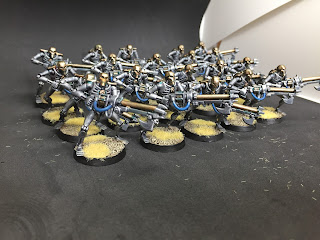 The new rules mean these chaps spend quite a lot of time on the tabletop as "reanimation protocols" works every turn a warrior is dead now instead of being a one shot pseudo invulnerable save.  With the bulk of my menacing warriors done, I'll be turning my attention to the more specialised areas of the army next - HQs and Immortals next up I think.

don't you just hate it when they keep coming back :)

Horrible ever-returning pain in the a***!

Great stuff Jamie - the back story on this collection just makes it more fun, as the "recycling" aspect plays well with the Necron background in my opinion :-)