I was under the impression that the Seraphon would be a quick paint but these seem to have taken ages. I’m pleased now as I’ve done the most numerous elements for this army and now I can crack on with the big fun things like enormous bitey DINOSAURS!!!! 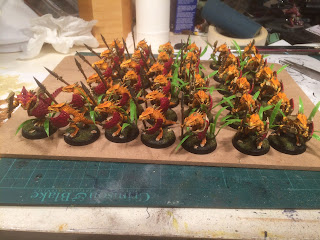 I didn't go OTT with the foliage as I was just trying to give the impression of Lustria as was rather than making the unit look like a walking shrubbery. 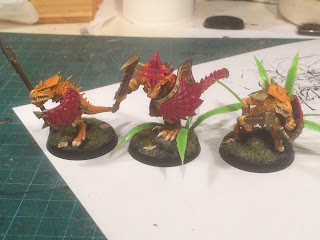 Boss man..er...Lizard and his chums. 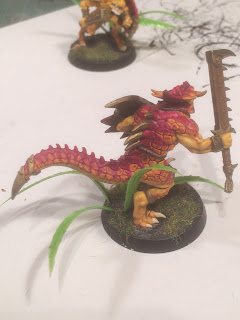 The Old-Blood got special treatment for his colouring. I'm intending to add increasing amounts of colouring and patterning dependent upon how tough the unit is. Big nasty Dinos will get increasingly dark skin and patterns whilst I've kept the Skinks and Saurus's skins light in colour.

I’ve also completed the Skinks. They were pretty much finished before I started the 365 challenge but I hadn’t varnished or based them. This has meant that the last few steps of Army dip, Matt varnishing and base texturing and painting have taken flipping ages. 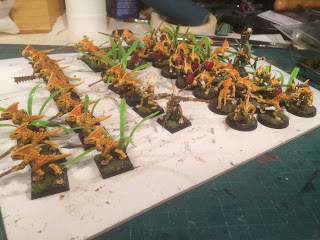 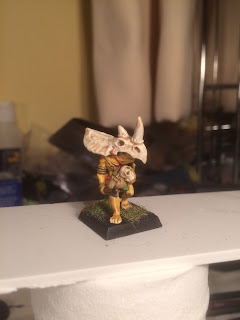 I had this old shamanic Skink hanging around for a Mordheim warband I'd planned.....years and years ago. 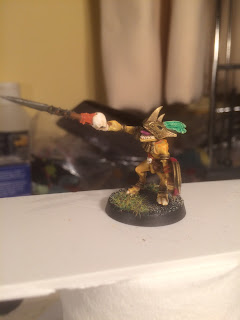 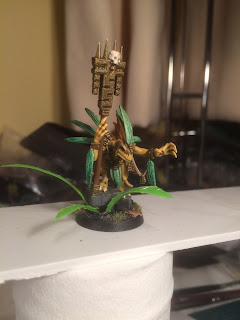 Star priest to lord it over all the lowly skinks.

So I've donw the first 37 figures in 30 days. Slightly ahead of schedule but not as much as I'd hoped. The next month is going to be tied up with getting as many more of the Seraphon done in time for Lenton on the 11th Feb as I can do.

I suspect that I might fall behind but I'm not overly stressed as I'm lining up 60 Iron Warriors to batch paint after the Seraphon and they should allow me to get back on track.

PS: I've treated myself to a light box in the hope that I can get some better pictures!