Still going strong on the gaming and we've managed to get two more games in.

Game six was another round of Zombiecide: Black Plague. We've nearly gotten through most of the starting missions now and this one was fun but didn't pose that much of a challenge in the end. We’re pretty up to speed with Z:BP and a lot of it does seem to hinge upon the necromancers and the strategic removal of the spawning points as you eliminate them. We managed in this game to remove all the spawning points furthest from our end goals so in the end we grabbed the last objective and legged it whilst the legions of the undead started to conga line their way across the board to us.
Good fun but not as hard as some of the missions have been. 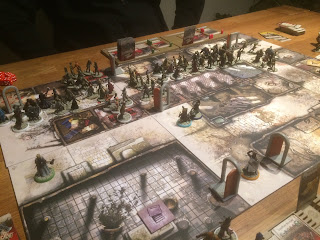 Game seven was a more involved affair as Urn and I are heading north to Lenton in Feb and we needed to get an idea of how to play AoS. So we slapped some units on the table ignoring points and balance and just had at it. Seraphon and Undead (Me & Junt) vs the Dark Elves (Urn and his lackey) as an unlikely scenario but we didn't care!
Set up was an un-informed sort of thing as we had no idea how it would affect the unfolding events. 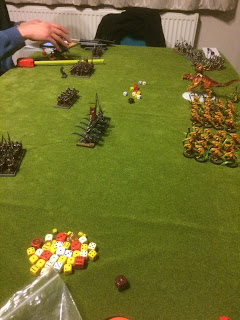 We soon got stuck in though with the Seraphon rapidly closing with the Dark Eldar in a great mob of tooth and claw. 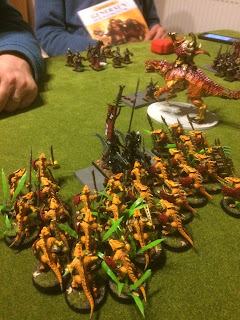 Their allies sent in the cavalry…. 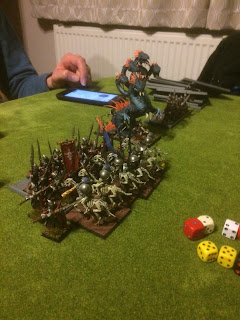 ….but this was to prove to be a step to far as the rest of the Skellies didn't make much ground as they failed some charges. Yeah. They stood around a lot! Bone idle if you ask me! Geddit? Bone? Idle? I’ll get my coat. 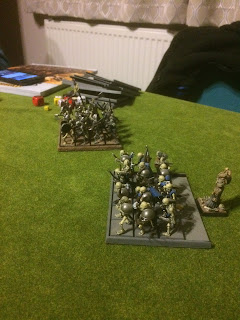 The lack of skeleton support proved to be the undoing of this strange alliance as the Seraphon got ground down despite some early gains. 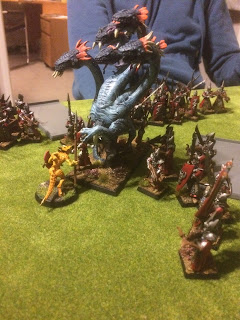 It got lonely at the end for some of them.