Following on from Executioners the other week, some more nasty Dark Elves for AoS/Warhammer/insert other fantasy ruleset.

First up are 10 Cold One Knights.  I tried to do some research into what these should look like, but I found there was almost no reference works at all on giant riding lizards.  Imagine my surprise and chagrin as I discovered that not even Sir David Attenborough has done a programme on them.... I obviously penned a letter outlining my disappointment in this fact to the BBC.

I decided that I quite liked a blue colour that I had from the GW range with a suitably theatrical name - Incubi Darkness - and research on blue lizards showed that the underbellies were often a lighter shade of the same colour, so that's what I went for.  I went for bone coloured horns for contrast. 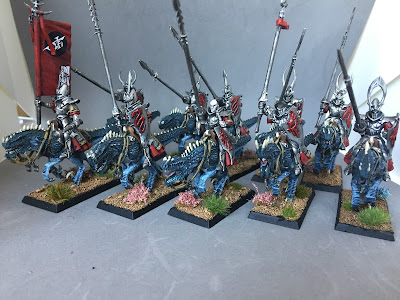 The Knights who ride these are the nobles of Dark Elf society, so nice shiny armour for them, with red trim and shiny red shield designs. 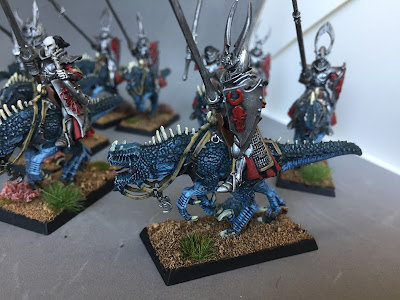 I'm rather pleased with the colours and the lizard skin.  I kept the clashing red and blue as the rest of my Dark Elf army wears red and there's no way the nobles would change their clothes to better match riding beasts! 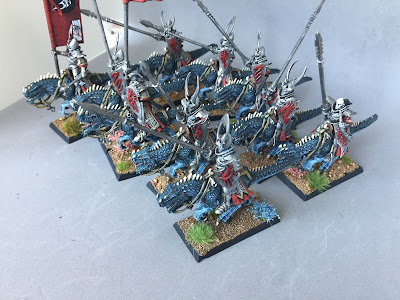 In a stroke of luck genius strategic planning, the shield design on the leader as the same as one of the decals that I had, so the standard bearer gets designs for both the unit itself and the Lord in the bottom corner. 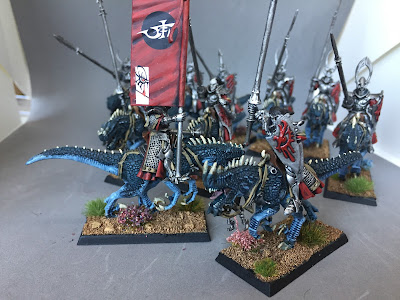 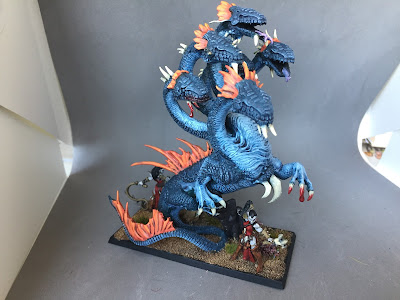 Imagine my surprise when I found out that Sir David Attenborough also hasn't done even one episode on many headed hydras in their natural habitat!  Fear not, another missive to the BBC has been sent to admonish them for this clear oversight. 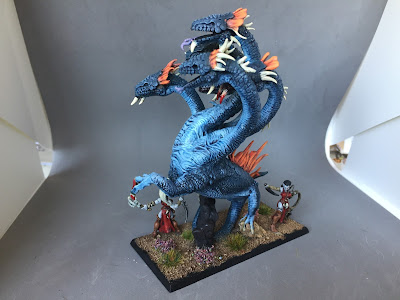 I stuck to the same colour scheme as the Cold Ones as I figured perhaps they were related.  A nice bright crest was added as the natural world seems full of poisonous animals with bright colours to demonstrate how dangerous they are to scare predators away. 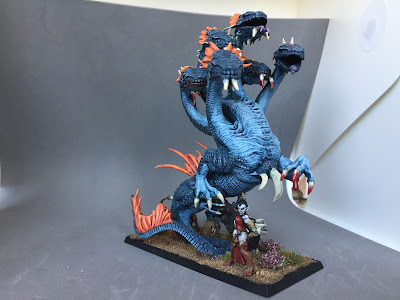 I wouldn't fancy being one of the two handlers of this beastie....  They're some old metal Dark Elf animal handlers instead of the one that come with the kit as I wanted to be different. 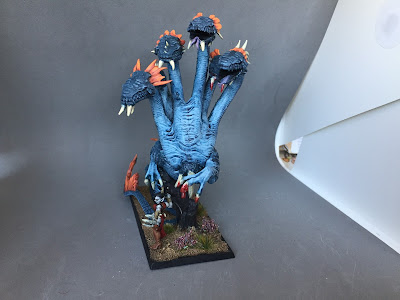 I also discovered that its very hard to take a picture of a many headed large beastie whilst capturing all of it.  I went for some muted blood effects too.  I'm not normally a huge fan of these, but I got to wondering when painting it how many heads it would use to attack things, so I added some effects to one claw and two of the heads as a result of my idle musings.

These two units had their first outing last night and did jolly well - the riders dove into action and were dragged down but the Hydra killed lots of stuff, for fun.

This completes most of what I want to get done for the Dark Elves and so my attention should now probably turn to 30k...... and it might do if I hadn't got into conversation with a couple of fellow bloggers who heartily recommended Epic to me.  One failure of willpower on my part later and I had procured this on eBay. I shall hopefully be diving into this in the not too distant future as I do like the look of the game.
Posted by JamieM

Very nice work on the Dark Elves. They look superb. :)