So, Dave and I managed to get some time in our diaries to play Flames of War for the first time in quite a while and, having obtained the requisite passes from our commander-in-chiefs, we decided to make it a big one - D-Day :)

(Well, not actually all of it, just the Queen Red sector of sword beach for those of you with a historical bent)

We have played this before, but since then our scenery collections have improved somewhat, with new bunkers, landing craft, buildings, roads, etc. We set up the day before remembering how long it took last time.

This is a shot the British troops would get in their rolling ride up to the beach. 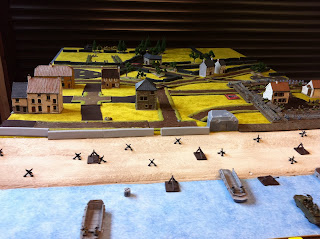 The key points were Strongpoint Cod on the right just of the beach (bottom right of this next photo) with lots of Germans in and an 88 bunker trained along the beach, and Strongpoint Sole in the top left (you may just be able to see the MG team and CiC who were it's only occupants at the start of the game if you squint hard enough!). To win, the British had to take objectives in both strongpoints and my reserves would be coming on to reinforce Sole later in the game..... 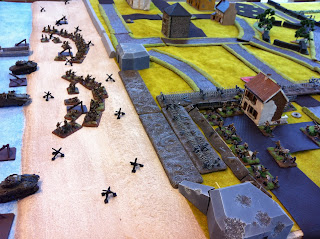 The picture above was the British first wave, with the sea playing havoc with getting things onto the beach in good time. Fortunately, Dave's prelim bombardment had pinned all of strongpoint Cod and it took them 4 turns to recover, much denting their ability to shoot the British! There's an artillery observer in the white house with the red roof and he would prove to be my man of the match as he could spot whilst pinned down, but more on him later...... 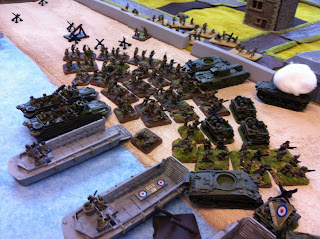 This is more like it, with the drift of the current meaning a lot of Dave's troops came in right next to each other and hampered their ability to deploy and advance. It certainly proved to be a "target rich environment" for my artillery observer though :) You'll see the smoking flail Sherman at the top of the beach - he came into the sights of the 88 bunker!

And watch out for the sandy based platoon who've made it off the beach, more on them later.... 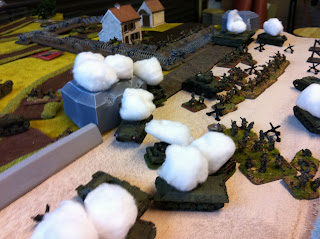 This is further into the game and the artillery has been absolutely brutal, the smoking wrecks of 4 M-10s, MG carriers, AVREs and Shermans litter the beach, hindering line of sight, as the infantry try in vain to take Cod with it's minefields, barbed wire and trenches. You'll also see my KwK bunker in the middle of the beach is down, destroyed by a bunker busting shell from an AVRE.

Just following this, the commandoes stormed past the cowering infantry, ran through the minefield and the barbed wire, losing only a few to lots and lots of shooting (Dave's saves were just inspired) and smashed the defenders of Cod to pieces (I was too shell shocked to take pictures at this point I think, Dave used to be in a Commando regiment so this performance didn't surprise him at all!).

The brave commandoes were thrown back by the lone remaining platoon commander and then returned to their ships due to casualties suffered, but their intervention meant Cod was left undefended apart from my arty observer (my main platoon defending Cod also broke due to casualties suffered in the assault) who was cowering in the house having suffered 8 turns of absolutely everything thrown at him to try to get rid of him.

With Cod all but lost, attention turned to Strongpoint Sole...... Now, my reserves were rolled for from turn 3 onwards, needing a 6 to get a platoon and with 1 extra dice per turn (starting with 1 die on turn 3). Now that's a whole heap of dice. How many 6s have I got with 9 turns gone? One. Uno. Ein. I get 8 dice this turn and I'm not expecting to get any 6s in that lot either!

Anyway, below is the current state of play of the objective. The MG team died to a lucky machine gun shot before they got to fire and my plucky CiC (left of picture) is currently engaged in a game of cat & mouse with the AVRE who is shooting and assaulting him, but he has led a charmed life and refuses to lay down :) My one reserve platoon is storm-trooping towards the objective (top right of picture) and are taking fire from the Sherman flail tank as they do so. Dave's sand based assault troop (remember them?) are on the bottom of the picture. Took them a while to get up here as the they were hit by arty and then wouldn't unpin themselves for 3 turns! 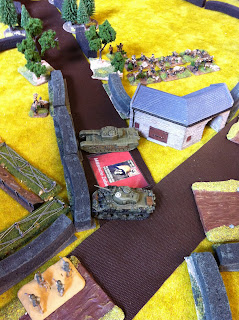 So, it's all going to come down to whether my reserves actually arrive along the road at left top of the picture and whether Dave can keep me from contesting the objective (within 10cm).

It was such a long game that we didn't get to finish it in a day so will hopefully finish it this week sometime. I think it's fair to say that it's on a knife edge :)

The fun thing about re-fighting a historical scenario like this is that you care much less about winning and it's more about which little figures pull off heroic manuoevres.... or run away screaming at the first sign of trouble!

Stay tuned for the next blog post later this week to see how it all ends.....

Looks cracking! Even better than when we played it before now that you've got the extra bits like the landing craft!

the game is in the balance and the brits stopped for tea... how unusual.

Just when you think you have enough terrain you lay it out for a 8'x4' board and you are missing stuff.