It's great to be back in the AHPC and I realised in past challenges that the key is getting something quickly done first..... so I completely ignored my own advice and did a big unit in one go instead....!  Hence it's taken me nearly three weeks to make my first submission but the lure of the challenge has had me painting far more than I would have done previously.

But enough of my silliness, my first post consists of 30 Dark Elves, specifically Executioners. 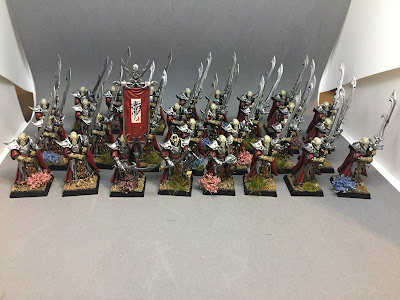 Dark Elves are generally the bad guys and it's no exception with this lot.  These are the chaps who perform all sorts of horrible executions of the Dark Elves enemies, usually involving the ridiculously large double handed swords that they carry. 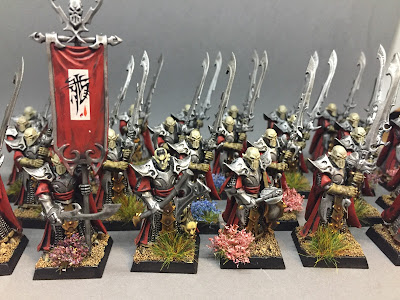 As you can see, they take being scary to another level by wearing skull faced helms.  I decided to paint these in a bone scheme to serve as lacquered armour.  The only one of these enigmatic fellows who doesn't wear such a helm is the leader.... Is this because he is the only one allowed to speak for the unit?  Is it because he has killed enough enemies that he is allowed to show his face to allow his reputation to scare the enemy?  Or is it because whilst clipping them off the sprue one helmet fell on the floor and no amount of crawling around on my hands and knees searching and cursing could find it?  I guess we'll never know.... 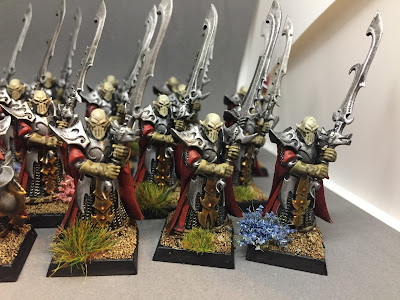 I went with a relatively simple scheme of silver, red and gold to keep the focus on the helms and huge swords. 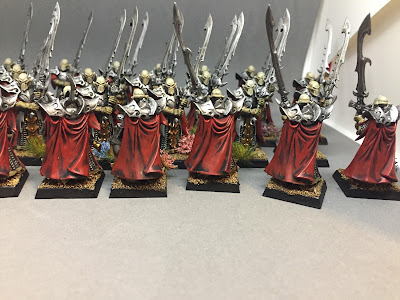 With regards to rules, we've started playing Age of Sigmar from Games Workshop...... a somewhat controversial game as, in a fashion all too familiar to GW watchers, they utterly botched the launch, succeeding in alienating almost all existing players and putting stupid rules in for some units (including such gems as "if you can get your opponent to look you in the eye during your turn, re-roll hits for your medusa" and "if you pretend to ride an imaginary horse during Magnus' turn, he gets +1 to hit").


Fortunately, they've rowed back from the silliness with further releases and it turns out there's a pretty fun game under it all.  It has it's problems, being essentially a first edition after all, but we're enjoying playing and it has our whole group energised and painting.  I've kept to square bases instead of the round bases GW now provide and recommend for the game as I'm old school and I can then more easily use these figures for other mass fantasy wargames rules. 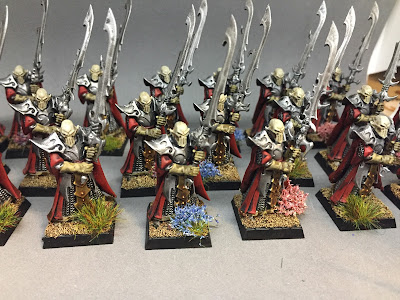 I'm pleased with these guys and there are plenty more AoS figures to come if I can stick to my plan.  I've painted up the maximum sized unit because I owned this many from a bargain eBay auction win (still on sprue!) and then have options on how to use them. 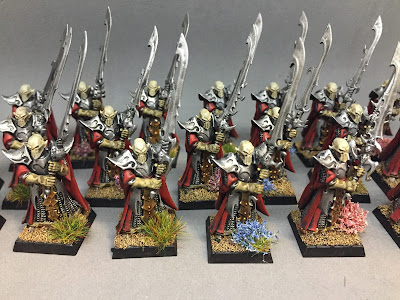 Well....as nice as Evil Pixies can be.