My drive is not diminishing!

The Paint-a-thon is forging ahead. I'm aiming to put brush to figure pretty much every night (excluding gaming nights) until I have done the main core of the infantry for the both the Iron Hands and Iron Warriors for 30K.

This does constitute quite a large number of marines in both power armour and also Terminator armour.

It's going to be a bit of a slog but I am committed to getting them done once and for all! I also have the added incentive of all the fun stuff to paint once these are out of the way.

Last night I was getting the first coat of red done on another 5 marines. This time it was some autocannon fellas. Tonight I've got 5 guys with Volkite Chargers to do and then I'll have the first thirty Iron Hands showing a decent amount of progress. From that point I'll probably work on all thirty at once as I do the second coat of red and the finishing touches. 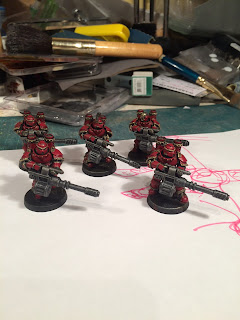 I'm still also trying to be constructive in my lunch hours so today I applied some glue and sand to the bases of my PE land forces. Fingers crossed the weather will stay dry and allow me to get these sprayed tomorrow and then I can start slapping a bit of paint on them as well. I've more or less decided on a steel and Dunkelgelb colour scheme with a limited amount of camo stripes on the non-metallic areas. 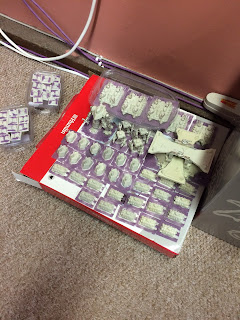 You'll have painted nearly as many as me by the time you've finished ;) good to see you keeping going on them..... I could never do any at work at lunchtime!

Those marines are lovely m8, will look perfect next to my mechanicum