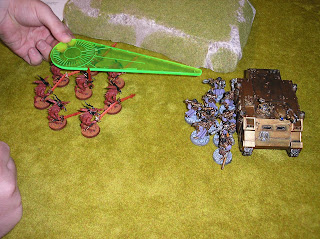 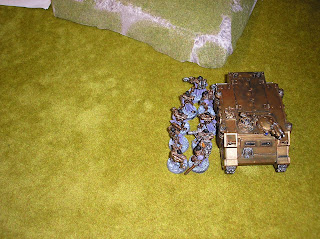 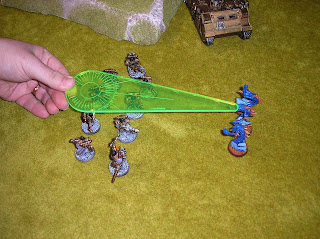 So, the first doubles GOG games occurred last night in the garage planet of Sulhamstead 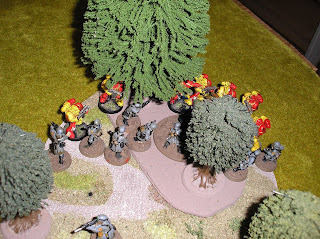 The battles were preceded with much rejoicing over the new oil fired heater to keep everyone in the garage warm and the rejoicing involved a sing-along about the flamers “Breath of Chaos” power (to the tune of “Bread of Heaven”).

We then diced off to see which of our loyal armies would be heretics and side with Nick and I won/lost that roll ;)

So, I set up the rhino aggressively in the annihilation/pitched battle game and the loyalist scum strung their troops out in a rough line on their side. Our turn one consisted of Nick’s chosen turn 1 daemon unit (the ‘letters) deciding they were busy so the flamers turned up instead. The appeared right next to a unit of 7 marines and didn’t scatter. The shooting phase consisted of those seven marines getting toasted for 21 (3 flamer templates x all 7 hit by each = 21!) hits which unsurprisingly finished them.

The loyalists then destroyed the flamers in their turn and spanged some shots off the rhino hull. 1 KP each at this point then.

My sisters then hurtled forward (the ‘letters decided they weren’t interested in turning up again), popped out in front of a guard squad & command squad and flamed & shot them pretty much to death over the next couple of turns for no casualties in return.

Nick’s Bloodletters only turned up on turn 5 (!) but then excelled themselves by making 6 out of 7 5+ saves from shooting! By this point the sisters were embroiled in a fist fight with the other marine unit which promised to last a while. However, the dice gods decreed that the game should end there and the Daemon/Sisters won by 3-1 KPs.

As this was a quick game we then swapped and it was now an all power armour combo of marines/sisters in a spearhead seize and control mission against the heretic guard.

Whilst all this was going on, the marines had waded up the middle through a hail of fire and lost 4 of their number to flashlight shots! They then piled into the Guard & delivered the beat down in combat (see pic) before finishing the last couple of flamers
.
This all meant that we’d wiped out our opponents (good job really as we had ignored the objectives) so a win for the rhubarb & custard and sister force.

Learning points from the game?

Flamers are super hard when they hit (so much so that there were mutterings from Jenkin of 3 units of 3 in the final list instead of 1!)

Freeth's guard couldn't hit their ar$e with a banjo ;)
Posted by JamieM

Flamers, flamers, flamers...it's the way to go....I'll also be taking in a coupls of Autocannons, possibly in a hardened vets unit. BS 4! Should hit something then!!

Although after my 500 pts game against the Orks where I flank marched to within 1" of the ork bikers and still failed to hit too many....I remain sceptical!